I don't know if you've noticed, but the names of Asian dishes can be delightfully graphic and evocative. It says volumes about the way we view our sustenance, or are we really perhaps, beneath our usually placid exteriors, poets at heart or slightly crazed? ;) 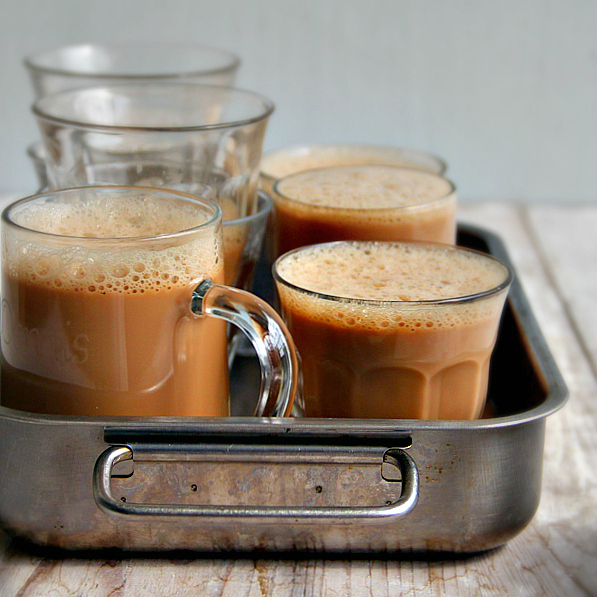 Sometimes, we almost wax lyrical, as in the case of Dragon Beard Candy or Putri Salat (Princess Salat or salat of the Princess??). Sometimes we get physical, for instance when a Monk (sometimes Buddha himself!) Jumps Over the Wall.

Often enough, we have humour coming out of our ears, as evidenced by calling unassuming little rice flour cakes floating in a coconut milk sauce, Badak Berendam (soaking hippos). Other times, we're downright creepy; would you want to eat Beh Teh Saw (horse hoof biscuits) and Ants Climbing A Tree? : P

While we've known these dishes virtually all our lives, and probably even eaten and enjoyed them all, to others from a totally different culture, we may come across as slightly loopy to put it mildly. I suspect though the British could probably equal us; heard of Toad in A Hole? What about Spotted Dick? Oh my....... 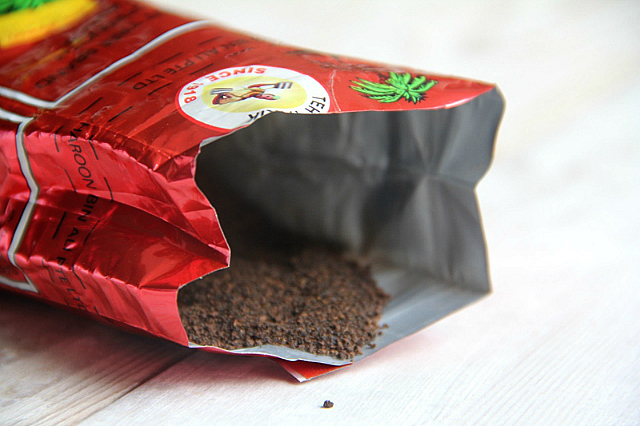 Alright, this is just my hmm, subtle (?) way of easing you into one, in my opinion, of life's greatest pleasures, a  mug of thick, rich, creamy and frothy teh tarik! Familiar as I am with it, I can't help smiling each time I contemplate a tall steaming teh tarik, and think what a teh tarik virgin might imagine on meeting one. Teh is a Malay word meaning "tea" and tarik, also Malay means "to pull" or "pulled" and it is a very physical word. A likely sampling of thoughts would probably go along the lines of - "Was this poor mug of tea mercilessly stretched out on a medieval rack until its spine almost snapped?!? How on earth do you pull a liquid??! Oh my God!!! They swore molecular gastronomy is dead and it's safe to eat out again!!!" 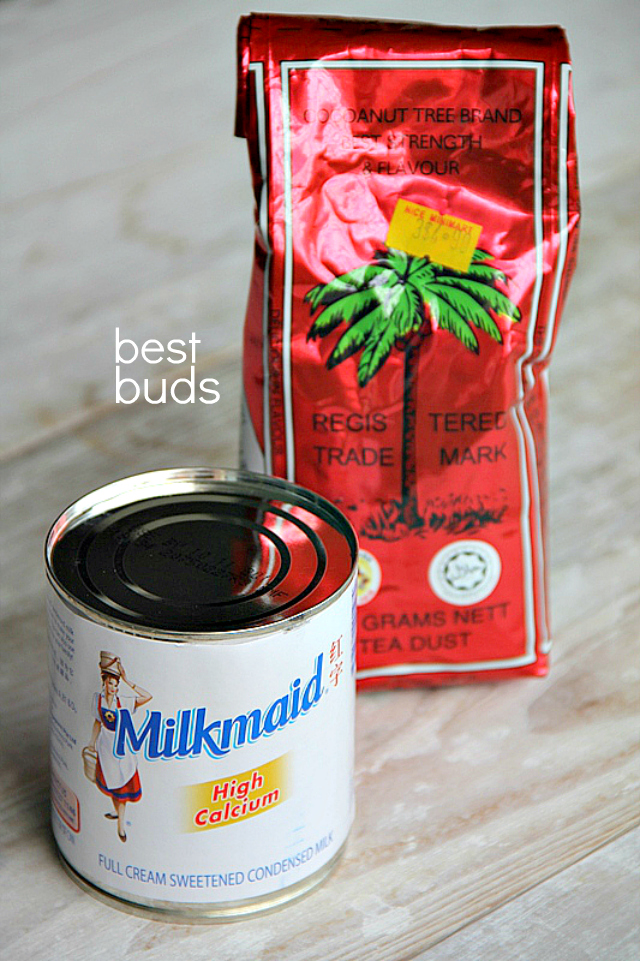 Thankfully, usually, no mugs are hurt in the making of teh tarik. It's appearance is completely innocuous in contrast to it's graphic and kinetic name. Visiting out of towners who have never seen one have described it as a funny looking cappuccino. Teh tarik is just milked tea that's repeatedly poured from a considerable height between two receptacles (usually very large enamel mugs)  until a thick, almost creamy head of foam sits atop the liquid tea. The process, when done briskly and expertly does give the illusion of the milky amber tea being pulled or stretched between the two receptacles. 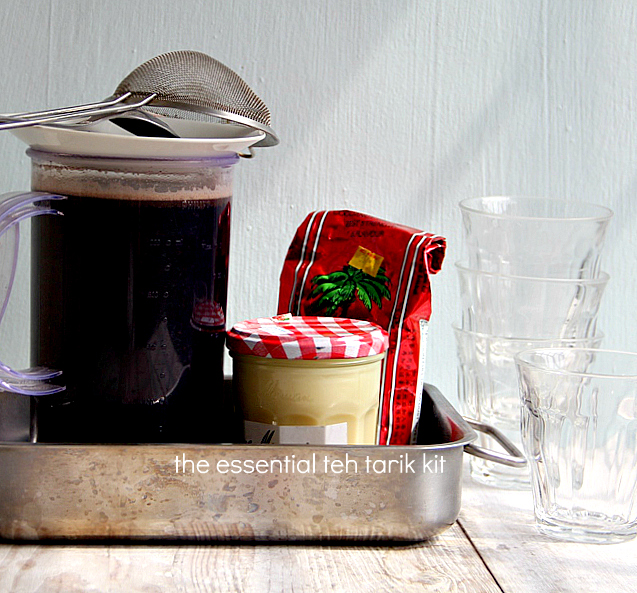 The Malaysian teh tarik man is particularly deft and well known for his teh tarik acrobatics, calling to mind Brian Flanagan's cocktail shaking shenanigans in the movie Cocktail, or the tea pouring artists of China, pouring out tiny cups of steaming tea from a spout metres long, while executing flawless spins and twirls, without spilling a drop! 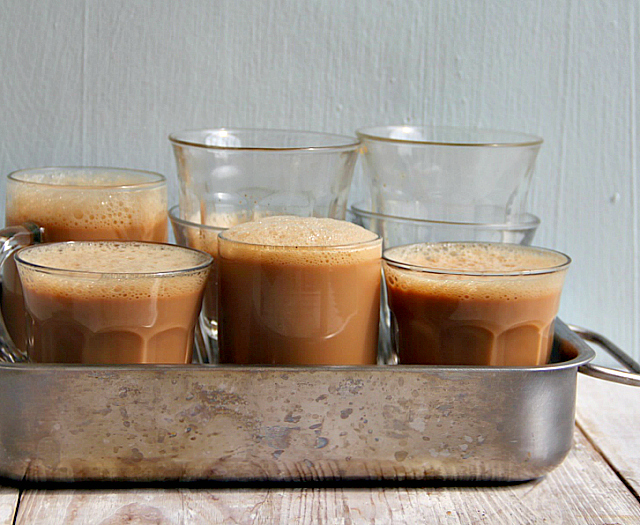 But why all the fuss? Why not just drink a cup of tea brewed the 'normal' way, without all the pulling and pouring, or the chance of getting a nasty scald from the steaming tea, precariously and fleetingly transferred from one mug to the other? Do you think we would persist in such derring-do, go to all that trouble, if there wasn't a payoff? Of course not!! 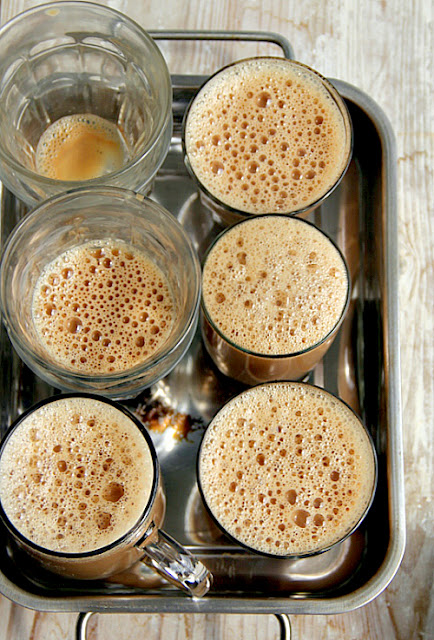 The repeated pouring from one cup to the other cools the tea while aerating it much like whisking aerates whipping cream or eggs, and really does seem to improve the flavour.

All of this means you get to drink the delicious tea as soon as it's placed before you.

None of that having to wait for it to cool to the perfect temperature where it's neither so cool that the flavour and aroma are reduced nor so hot that you burn your tongue before you can actually taste it.

Habitual tea drinkers will know that the line between scalding and perfect tea is a very fine and fleeting one. I'm tempted to say that teh tarik is thus, the perfect cup (or mug) of tea, but that might be stretching things just a bit. Trust me though, when I tell you that in Singapore and Malaysia, its fans are legion, and it's not difficult to understand why, if you've had one yourself. 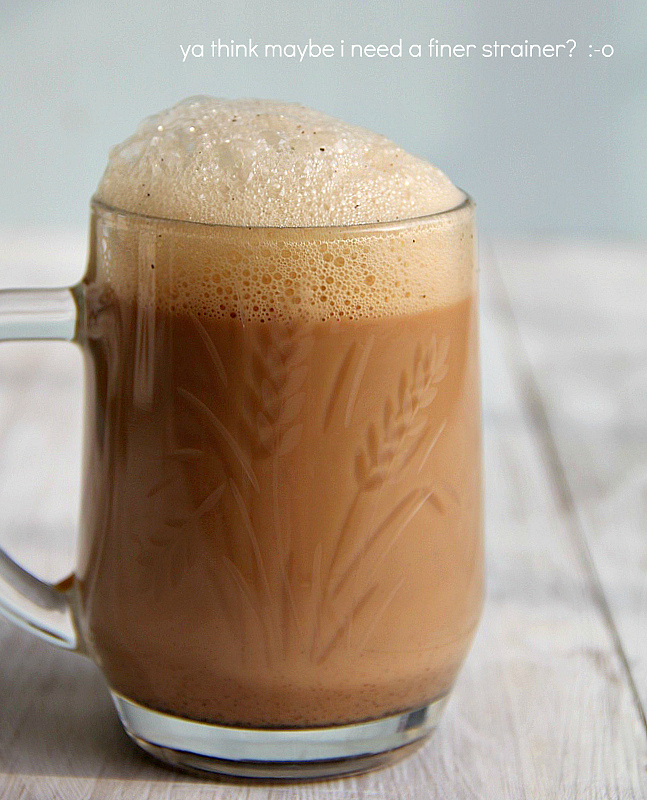 Most afternoons, all it takes to get me out of the mid day doldrums and satisfy any sugar cravings is a well made mug of teh tarik. It puts the spring back in my step and keeps me bright eyed until the day is done. Had I more poetry in my soul, I would have written an ode to it long ago. The best teh tarik you could hope to drink is the one made by a mamak teh or "tea uncle" in a hodge podge of Tamil (mamak - originally from the Tamil word mama) and Malay (teh). The mamak teh is a Tamil Muslim whose forebears came from India and introduced to us the grateful hungry and thirsty masses, classic Singaporean-Indian hybrids like teh tarik, mee goreng, rojak and prata to name just a few local culinary gems, and today continues to be the finest purveyor of tea and tea based beverages in this part of the world. Some consider the word "mamak" racist or derogatory when used in reference to Tamil Muslims, but I use it only with affection, gratitude and in awe of their culinary skills. Peace! 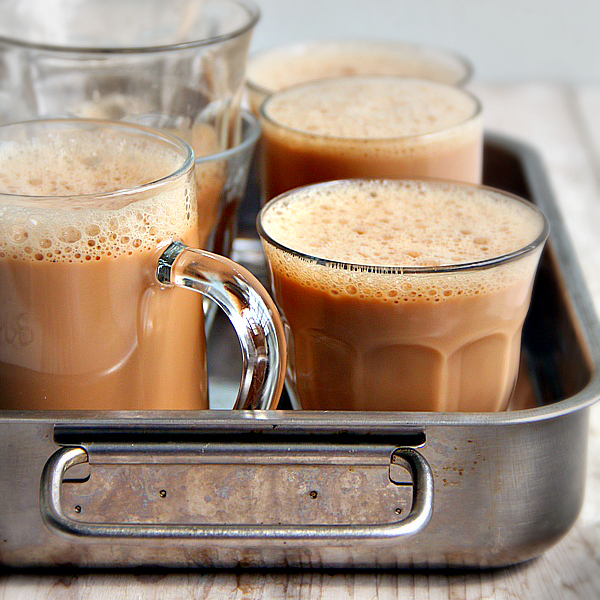 If you feel like trying your hand at stirring up some teh magic, don't use regular loose leaf or bagged tea or regular milk. You need a specific variety of tea called tea dust that is probably available only in India, south east Asia and perhaps Africa, further afield. Tea dust is the tea leaf fannings (tiny flakes of crushed leaves) that fall through the tea sieves during the sifting and grading process and are gathered for sale as a lower grade product. It has a distinct, almost perfumed aroma, produces a very full bodied brew and the characteristic dense, stable foam when combined with sweetened condensed milk (and only sweetened condensed milk please!). The resultant magic is teh tarik. Once you've tried it, no other will do!


Teh Tarik For a Crowd

Bring water to a boil then turn off heat.

Put the tea dust into a large heatproof jug or pitcher.

Pour over the hot boiled water and stir well. Cover jug or pitcher and leave to steep for 4 - 5 minutes. Don't steep for longer or tea will taste harsh.

While tea steeps, warm a large teapot by rinsing the inside with very hot water. Drain teapot well.

Add the condensed milk into warmed teapot and strain the tea into the teapot. Stir well to dissolve milk.

To serve, hold on to teapot lid and pour out tea in a thin stream into a mug, from as high as height as you can manage without spilling any tea or scalding yourself. You should have a respectable head of foam in your mug.

Serve immediately. For a more impressive head of foam, transfer prepared tea from one receptacle to another (I used two extra large mugs) until tea is very foamy. Pour into drinking mug and serve immediately.

Before I end today's post, I'd like to announce the winners of the Mum's Not Cooking cook book giveaway. There were originally 37 entries, each comment taken as one entry, with no limit to the number of entries per participant. One participant opted to withdraw her participation as she would not be in Singapore at the time of the draw, reducing the number of entries to 35. I used Random Sequence Generator, entering the smallest number 1 and largest number 35 to generate a number sequence, with the first 3 numbers taken as the first, second and third winning numbers out of the total of 35 entries. The number at the top of each column from left to right in the screen capture below is the respective first, second and third winner. 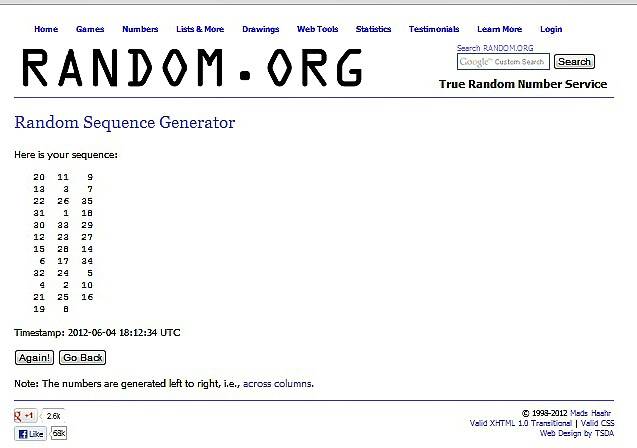 Congratulations to our 3 winners!!! I will be contacting you shortly, for delivery details. To all our participants, a very big "THANK YOU" for your enthusiastic participation and wonderful support!