At the risk of being known as "that pandan blog" I have decided to post today's recipe because it's hot. Go on, ask me how hot it is. Ask me. So hot, I could fry an egg on the pavement? Probably not. But definitely hot enough for my laundry to dry almost crisp as crackers within two hours. And just so you know, I do not own a dryer, so that's air dried laundry I'm talking about. Oh, how about I could make a Nescafe with tap water, if I wanted to, with the water heater off? No, I don't drink Nescafe, I save it for guests, but I only use boiled water to make it, I swear! *phew* ;) 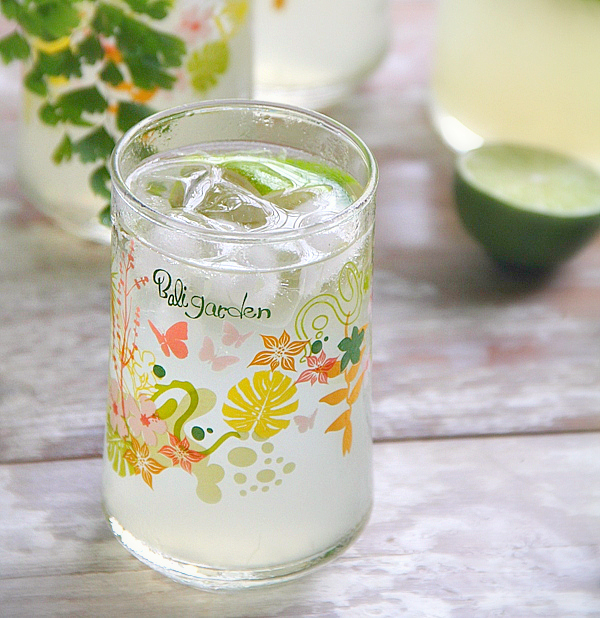 I did tell you, didn't I , that I looooove pandan? It's so common, so available here, we take it for granted. When I was little, it used to grow everywhere; by the side of the road, clinging tenaciously to the mossy green sides of huge drains, gaily dotting the gardens of kampung houses in big, rusting milk cans with holes punched out at the bottom.

These days, it isn't as ubiquitous, but it's still easy to find in the shops and markets, thankfully. It's not a terribly handsome plant, looking almost reed like, but the smell, oh, the SMELL!!! How do I even begin to describe it, adequately?? 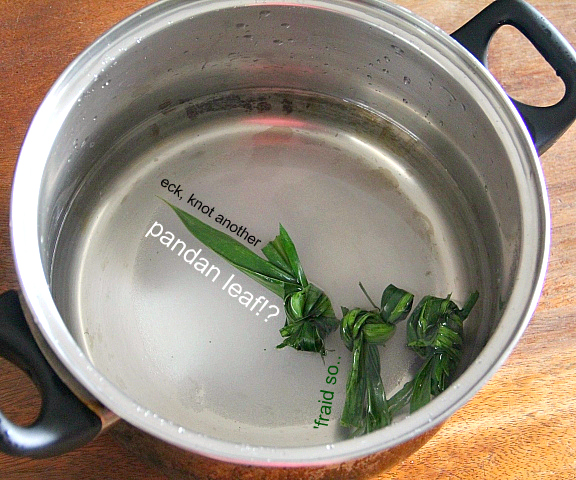 It's an intoxicating, bewitching cocktail of  gardenia, lemongrass, vanilla and pomelo, only much softer. If you ask someone else, you'd probably get a different answer, though almost anyone who has ever smelt it will tell you it's the stuff of foodie dreams. Really, what's not to love? If you've never smelt it before, think of the way your kitchen smells when you're cooking the highest grade of unblended Thai jasmine rice, and you would be somewhere in the ball park. 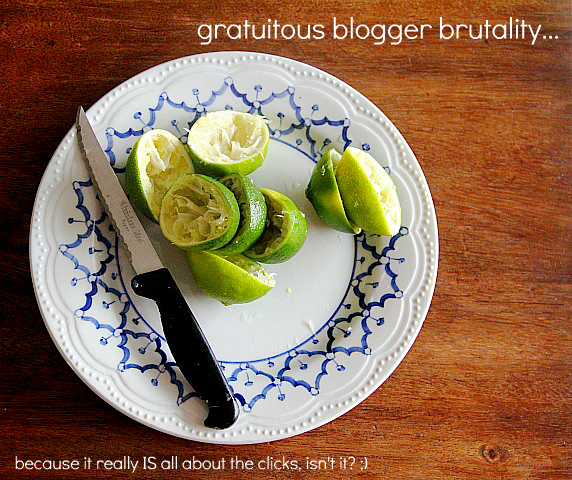 Now, before I forget,  a word about our other sponsor today. The lime is thought to have originated from either Iran or Iraq and they were first cultivated on a large scale in these two countries. The variety of lime I used for this drink, which is called limau nipis (thin skinned lime) or citrus aurantifolia for botany geeks, is native to southeast Asia and looks a lot like the key lime. It has an interesting background in Singapore and Malaysia. Got the time? I got a story! 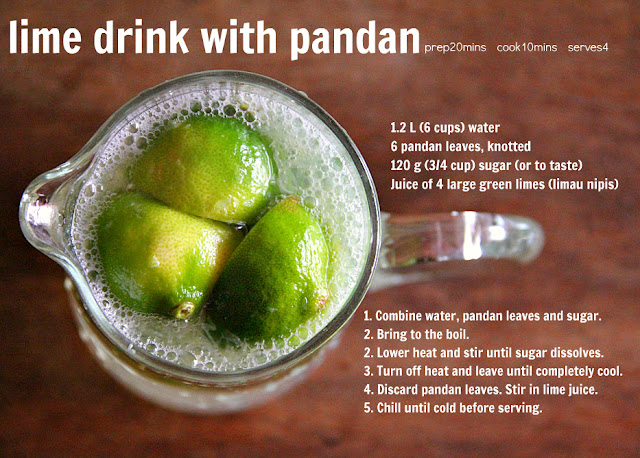 Besides being invaluable in the kitchen, the limau nipis is an essential 'tool' in  spiritual healing, postnatal care and black magic rituals practiced in Singapore, Malaysia and probably elsewhere in the Malay Archipelago. It is used in 'exorcism' and cleansing rituals, hexes and love charms and spells, amongst other things. How do I know all of "this"? Not that I've ever put a hex or charm on anyone, but you grow up in a kampung (village) and you hear things, and if you're lucky enough, you see things. 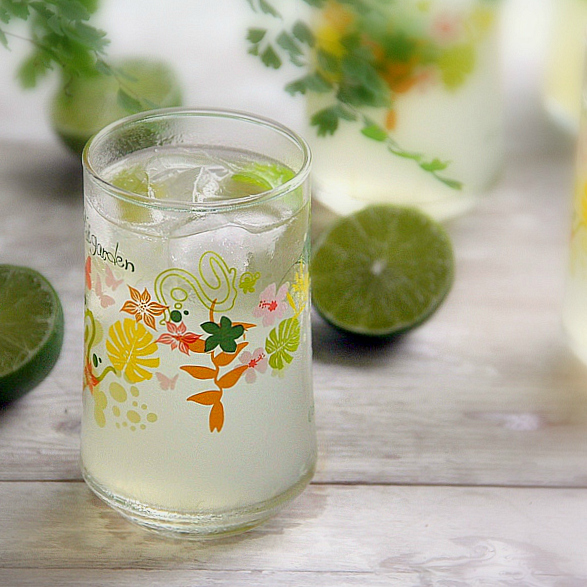 I had this impish cousin who used to love to scare the bejezus out of his dad, especially when his dad had crossed him one way or another. One day, he sliced a lime across in half, painted the cut surfaces red and stuck needles into the lime's girth. One half went under his dad's pillow and the other, by the side of the front door. He then waited for the fireworks to explode when his dad got home from work. Of course, his dad almost had a seizure but he got the hiding of his life in return. Ahhh.....the joys of childhood. 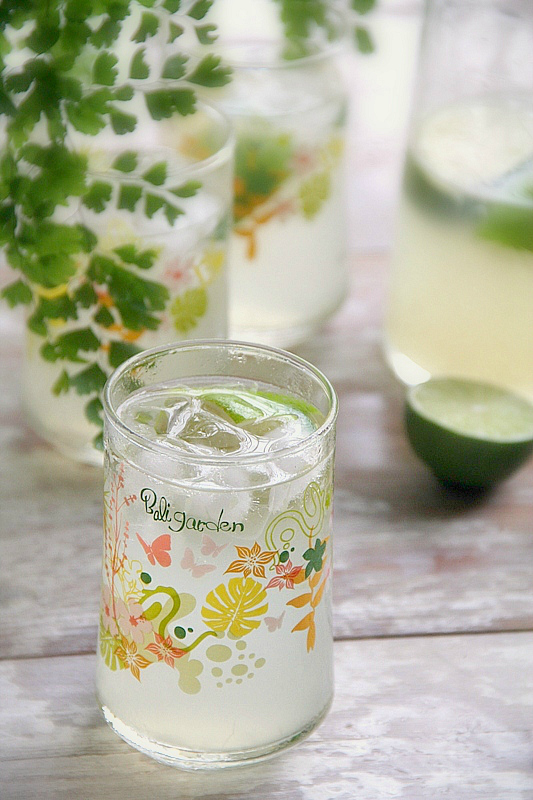 But..... I'm  a food blogger, so to me, the lime is just a gorgeous, green, glowing orb of luscious, fragrant juiciness, and good copy when the sun decides to come out and desiccate us mere mortals. The combination of pandan and lime with piles of ice is just short of magical, in this ungodly heat and with spicy or rich dishes like sambal, fish curry, mee goreng (south Indian fried noodles) nasi lemak (coconut rice), biryani or laksa. In fact, lime juice (often scented with pandan) is often found on the menus of fish head curry restaurants in Singapore. 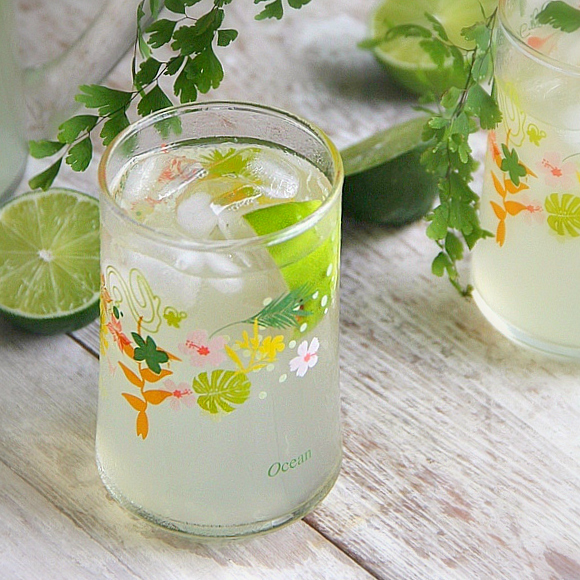 So, back to that question. How hot is it now in Singapore? If a picture really does tell a thousand words, the one below is testament to the ongoing tantrum her royal highness, the sun, has been throwing in this part of the world. No, I don't harbour murderous intentions towards plants and I don't favour the baked-kale-chips look, nor was I neglectful. Despite daily watering (note robustly verdant neighbour on the left) my dainty darling succumbed to the heat and is no more *sniff* If you're wondering, yes, those frilly maidenhair fronds in the pictures above were hers, in her prime, just two days ago. Oh, the pain! May her pretty soul rest in peace. 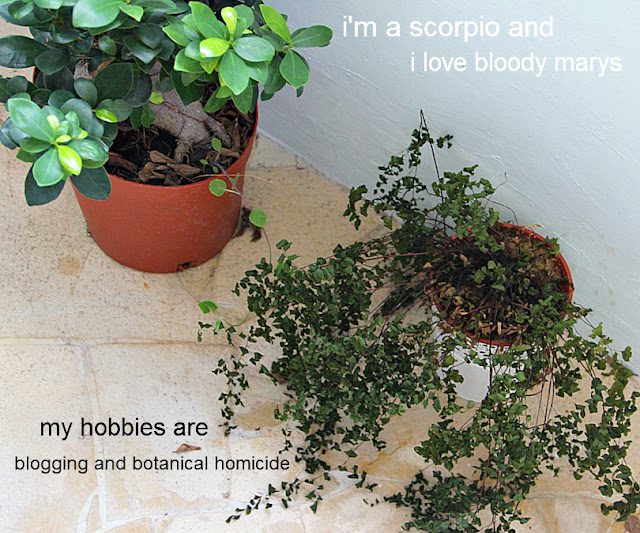