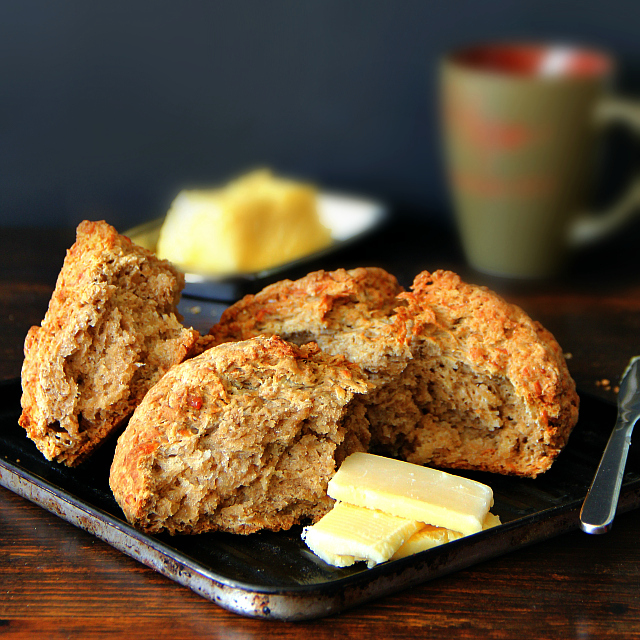 Can you tell where I'm going with this? I'll give you a hint. Leprechauns love green almost as much as they love gold. Ok, so I'm not Irish, not even Irish-descended, which is why I've refrained from calling this "Guinness and cheddar Irish soda bread". But maybe Scotland's close enough? No? Well I guess the only way I could make this even remotely Irish then, is by pouring one half of a Guinness into the mixing bowl, and the other down my gullet? 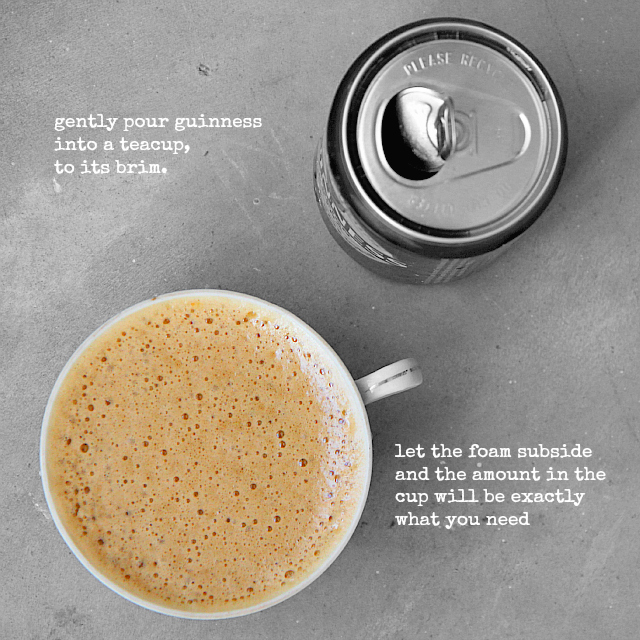 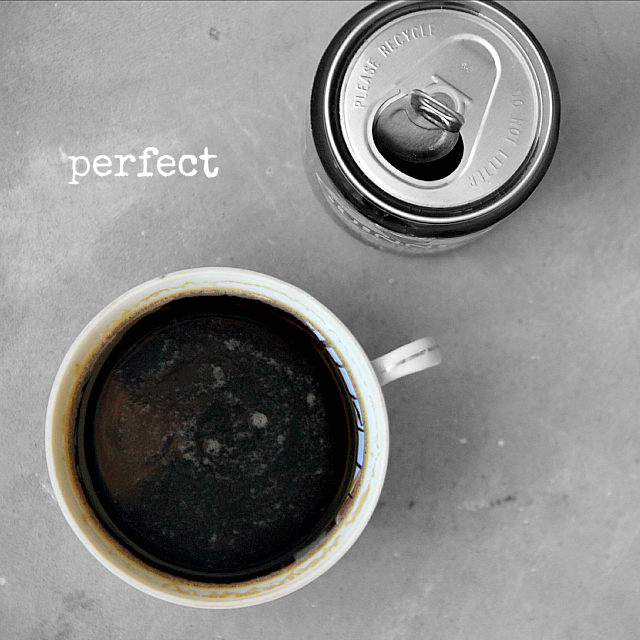 I've had an ongoing and passionate affair with scones, since I first started messing around in my mum's kitchen at the age of thirteen. So, soda bread is just three degrees left of my scone obsession. If you're  Scottish or Irish and you're reading this, forgive me for what I'm about to say. Soda bread (to me) is a big, fat, easy scone, perfect for cooks too lazy to cut the dough into smaller bits. Which makes them, a very close contender, alongside scones, for my quick bread affections. They're traditionally made with baking soda and buttermilk because baking soda requires an acid to bring about the reaction which produces carbon dioxide, to aerate the dough and make the baked bread light and airy. Buttermilk contains the lactic acid needed to produce the chemical reaction. It was originally plain, affordable fare, cooked in a covered iron pan over glowing embers, for simple folk, with few resources, so even eggs, butter or sugar, all considered luxuries in the past, were not originally included, let alone raisins, or any of the embellishments now commonly added. 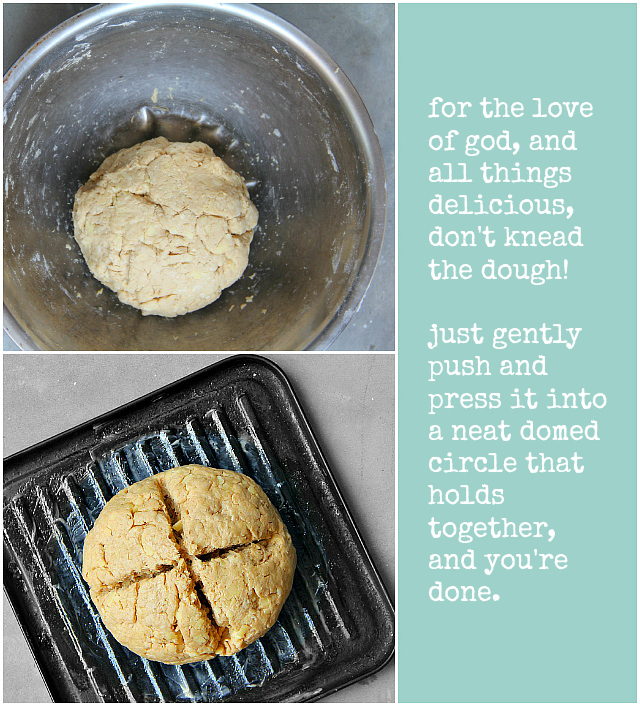 This loaf doesn't contain buttermilk as I wanted a heartier, punchier flavour, so in went the Guinness with some sharp aged cheddar, which meant I couldn't include the buttermilk or any kind of soured milk as the stout was hogging just about all of the liquid allowance for the recipe. The tablespoon of cider vinegar is the stand in for the lactic acid in buttermilk. It gives the bread an interesting tang and seems to underscore the beeriness of the stout; always a good thing, if you ask me.

The cross cut on top before baking, according to Irish lore, is "to let the Devil out of the bread", so the loaf won't be jinxed and fail to rise. It may or may not be true, but in a largely Catholic country like Ireland, it had and still has a resonance with a still deeply Catholic sensibility. It does however, prevent a haphazardly cracked loaf, helps the oven heat penetrate to the loaf's core for quicker, more even cooking and aids in dividing the loaf, without a knife. So, everyone's happy,  but the Devil, of course ;) 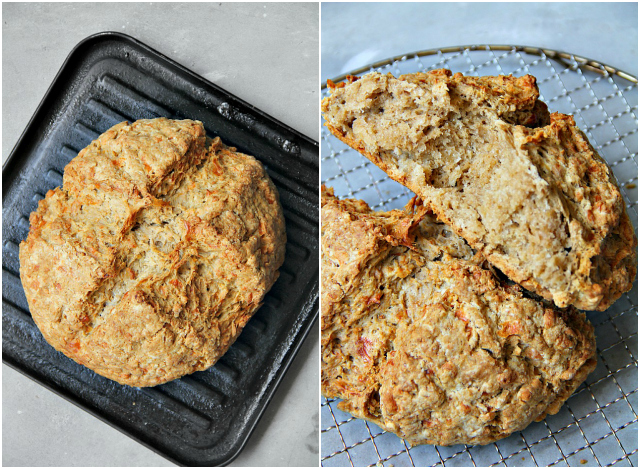 It may not win any beauty titles with its rough hewn craggy looks, but how I love this ugly little loaf for its rich, malty flavour, the mad crunch of its crust and the tender, fluffy crumb. It's not the kind of soda bread I'd eat with butter and jam (though the big boy gobbled 3 toasted chunks with butter and jam) but it makes a beautiful match with even more cheese or a hearty, steaming bowl of beef stew. Hubs kept hacking off slices to nibble plain. His verdict (verbatim)- "intriguing, unexpected, complex.... mmmmmmm!" 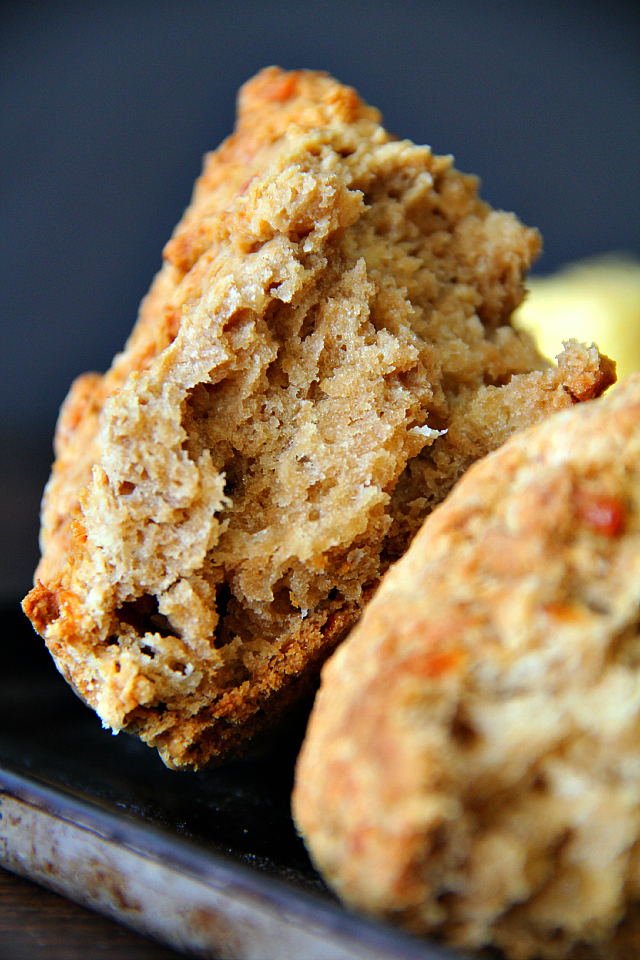 St Paddy's Day is just three days away, and if you're making corned beef and cabbage, or Irish stew, nothing would go better with either than this gorgeous, cheesy, savoury bread. How can I convey, just how delicious it is? I think I may never make any kind of bread with water again...or without cheddar. 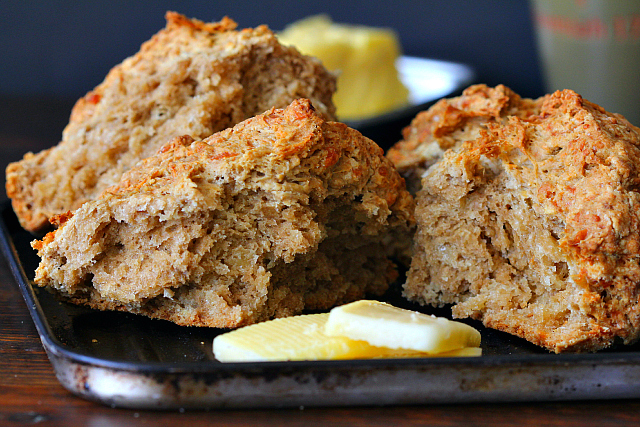 Before I go, did you know that Oscar Wilde is one of my favourite authors and Rory Gallgher is my guitar god? I can't get through the day without a dose of coffee, The Chieftains or Two Door Cinema Club? Still no dice? Ok, then. I tried to be nice about it, but now I'm taking out the big guns. Don't say I didn't warn you...

There once was a young lass named Tristan
Whose Guinness she ordered was pissed in
She said "I don't think,"
As she spat out her drink,
"On the menu that this one was written."

And NOW, this loaf is Irish!  Happy St Patrick's Day!!! 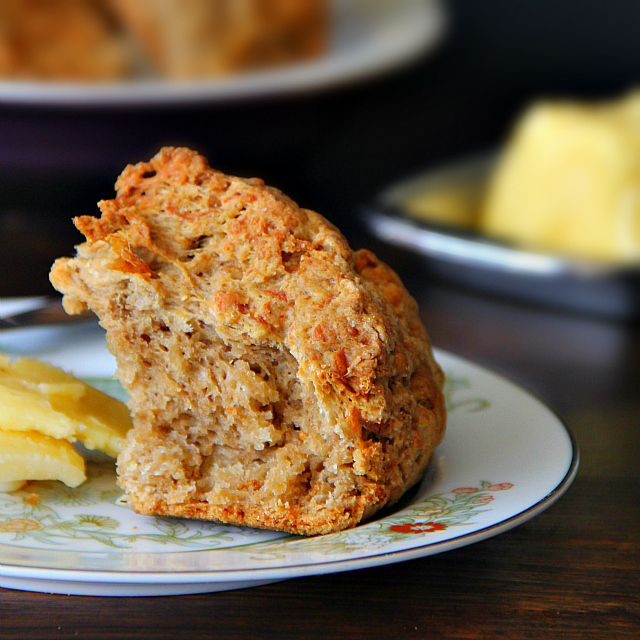 Preheat oven at 200 C (400 F) and line baking tray with baking parchment (non-stick baking paper).
Combine the flour, sugar, salt, baking powder and baking soda in a large mixing bowl. Stir with a whisk until thoroughly mixed.
Add grated cheese and butter and cut both into the flour quickly and lightly until the mixture resembles very coarse crumbs with bits of butter and cheese still visible here and there. Stir in Guinness and vinegar until you have a shaggy, messy dough.
Bring everything together with your hands, into a cohesive dough that holds together, while trying your best not to knead it.
Shape into a dome and transfer to baking tray. Gently score a cross into the top without deflating the dough. Brush the top lightly with egg, milk or water and bake for 35 - 40 minutes or until golden and crusty and bottom sounds hollow when tapped. You can also dust the top with flour before scoring, for an attractive rustic look.
Transfer immediately to a cooling rack and cool completely before slicing, or just break into quarters along the score lines. Eat thickly buttered on its own, with a meat stew or top thick slices with sharp cheddar or your favourite British cheese and toast until crusty and bubbling.
click here for printable recipe