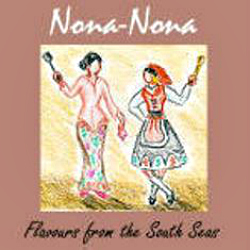 Nona-Nona is a celebration of friendship and the joy and camaraderie that food brings, between Denise of Singapore Shiok! and Biren of Roti n Rice. Denise and Biren met on the blogosphere in January 2010. At that time, they were like two new kids on the block who found each other and latched on immediately, as they had so much in common. Through the joys and heartbreaks of blogging they became friends.

This collaboration sprang up spontaneously in April 2012 as a fun way for them to further that friendship and to share their culinary heritage. They will come together once a month to feature an ingredient, theme, or cooking style which will be jointly published on both blogs. The fact that other than the chosen  theme, style or ingredient neither Biren nor Denise will not know exactly what the other will prepare, until the final reveal, only adds to the fun and excitement!

Denise lives in Singapore and is a Serani or Eurasian of Portuguese, English, and Asian descent. She grew up on Kristang cuisine which was lovingly prepared for her by her maternal Kristang grandmother, who along with her mother, has greatly influenced her cooking style today. Kristang food has its roots in Portuguese-style food, but like Nyonya cooking, is heavily inflected with local Malay, Chinese, and Indian culinary influences.

Biren hails from Malaysia but currently resides in Minnesota, USA. She is Straits Chinese with Nyonya grandmothers on both sides. Northern Nyonya cuisine with a mix of Chinese, Malay, and Indian dishes were part of her daily fare while growing up at her parents’ home.

Both cultures have their roots in Malacca, owing to the arrival and settling down of Chinese princess Hang Li Po in Bukit China, in the fifteenth century and the Portuguese colonisation of Malacca in the sixteenth century. Thus there exists a strong commonality between Kristang and Nyonya recipes and often, both groups will lay claim to extremely similar, if not indeed, the same recipe.

Nona is a Malay honorific word most likely derived from the Portuguese Donha which means lady. Straits Chinese women are called Nyonya, from the same root word which became exclusively associated with them. Nona-Nona is the plural of nona and an apt description for both Denise and Biren.

The two figures in the logo are shown dancing the Joget, a popular Malay dance derived from the Kristang Branyo, which in turn has its origins in the Portuguese folk dance the Corridinho. Who says you cannot have fun while cooking! :D