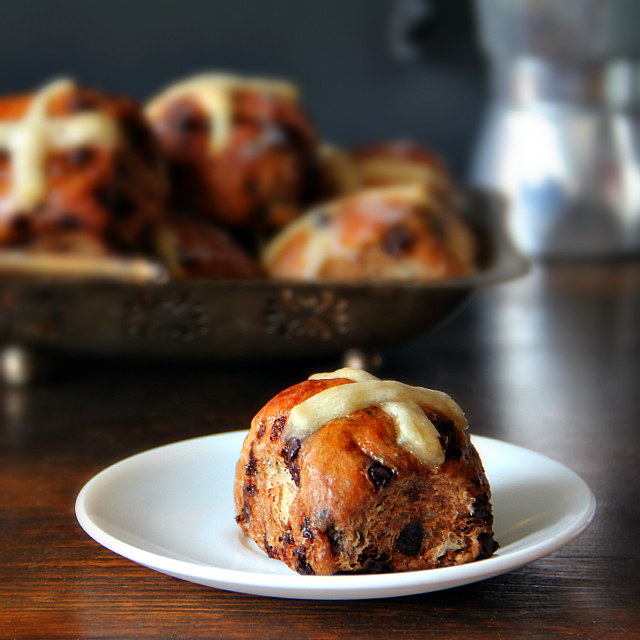 After days and days of delicious fruit filled tea brack with mug after mug of tea in the afternoon, my original plan to make traditional fruit speckled hot cross buns at some point during Holy Week, began to loose its lustre. I had loved every fruity slice of dark, moist, spicy tea brack but it felt more and more like hot cross buns would be more of the same, albeit in adorable itty bitty yeasty bun form. 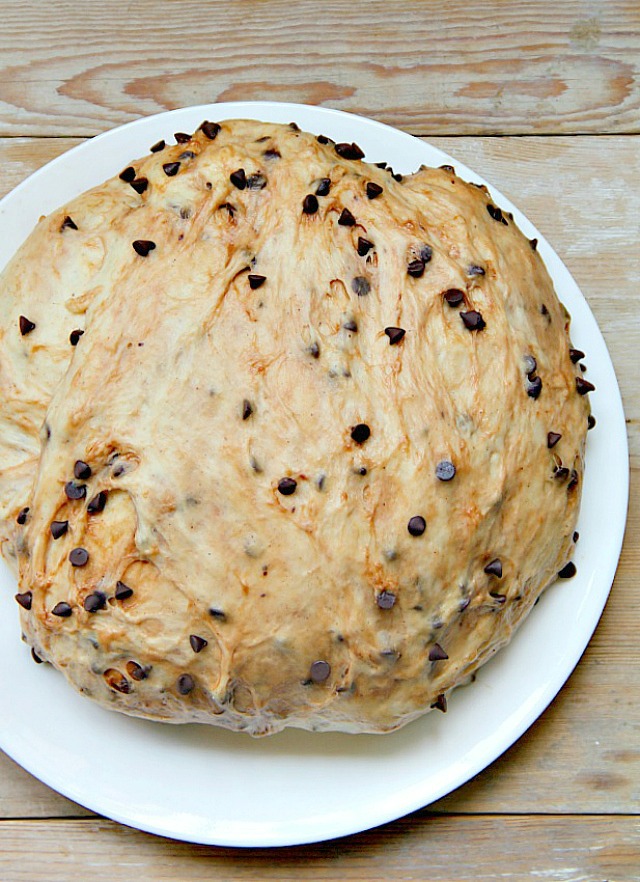 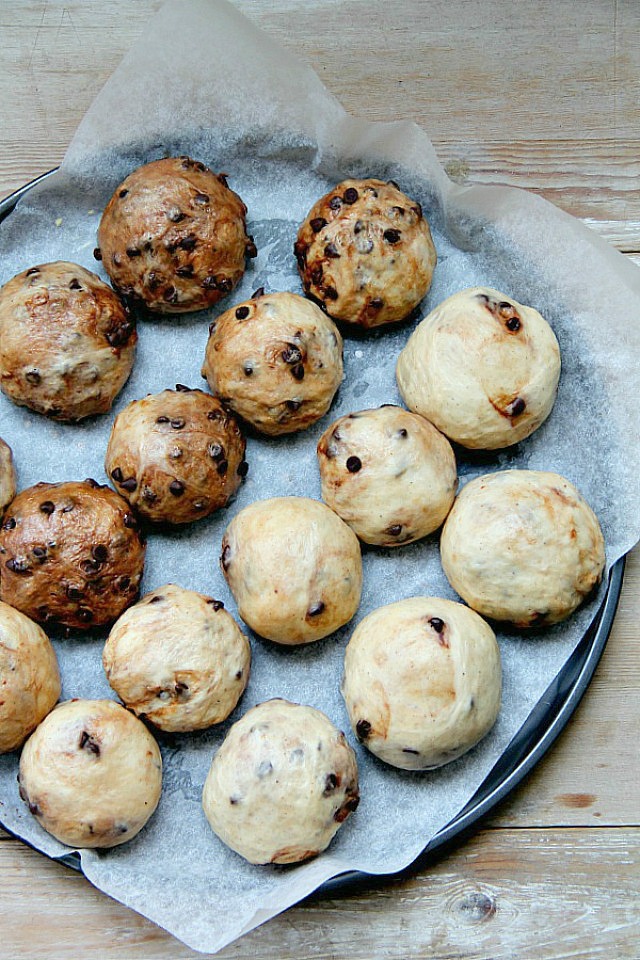 Then a friend came a knocking, asking if she could stir up some hot cross buns in time for Good Friday with me, for her sweet little bubs. Her question turned on about a dozen light bulbs in my head and I knew I wanted to make chocolate chip hot cross buns. She was thrilled with the idea as most kids turn their cute button noses up at all manner of dried fruit, and most especially, at candied peel. 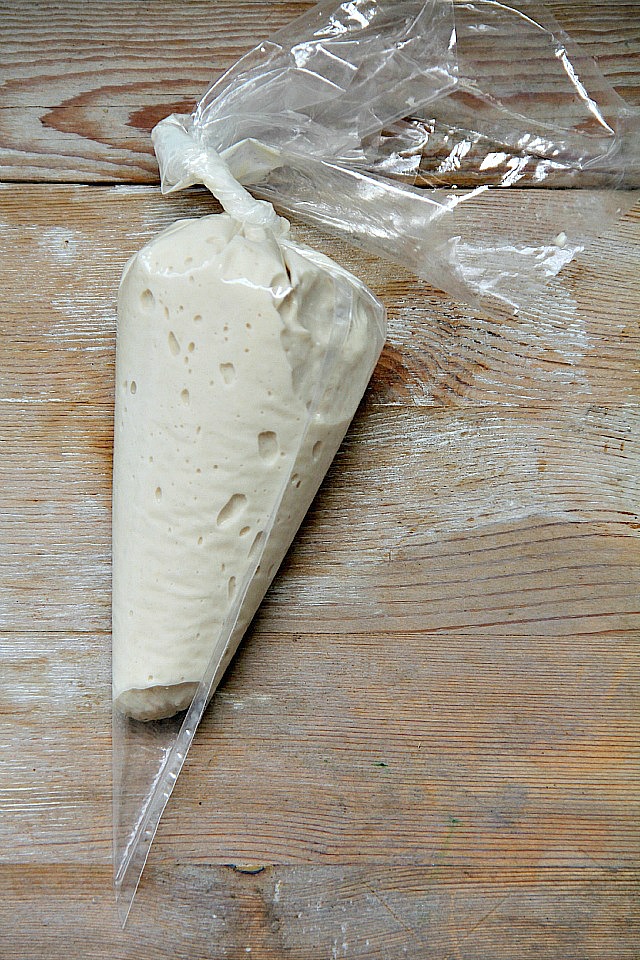 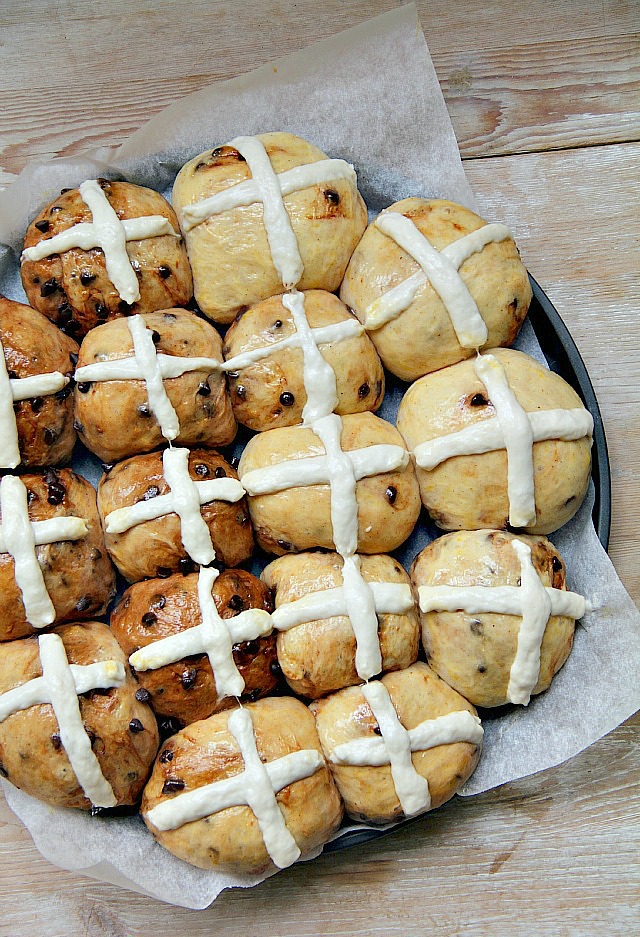 That most people get cagey around raisins, prunes and family I can understand but when anyone (ok, bubs and babies exempted here) disses candied peel, it just plain hurts. They're tiny bombs of citrus perfume and flavour. What's not to like?! Maybe I'm pushing it, or maybe, the only people who get it are the kind of people who love marmalade; my kinda people. 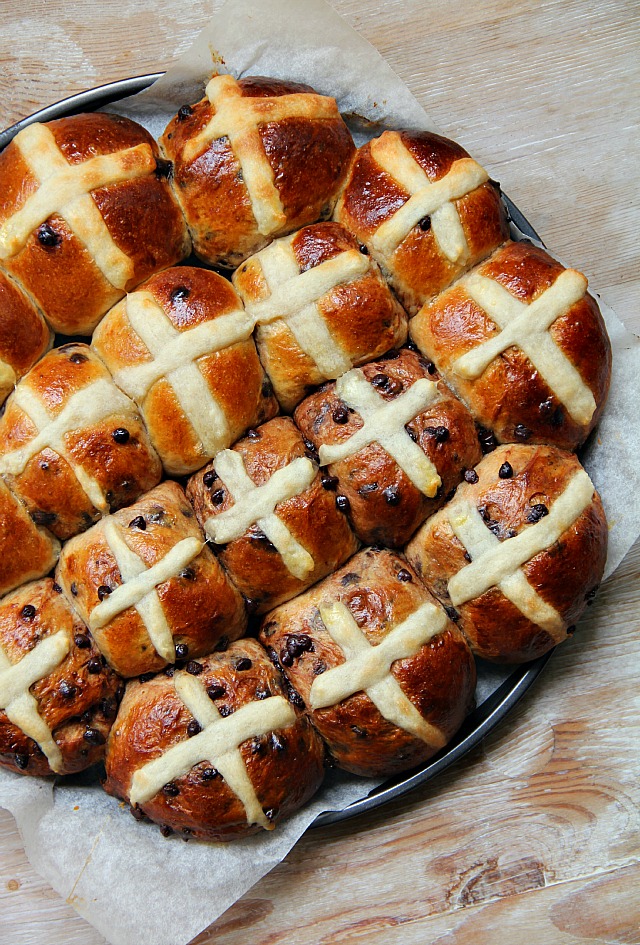 It was fun baking with a friend, though the between kneading and proofing gossip was so engaging, I forgot to take pictures until midway through the process. The buns turned out beautifully tender and moist and the fact that they were riddled with chocolate instead of the often reviled raisins, currants or peel, meant that more than half the batch had disappeared long before dinner. 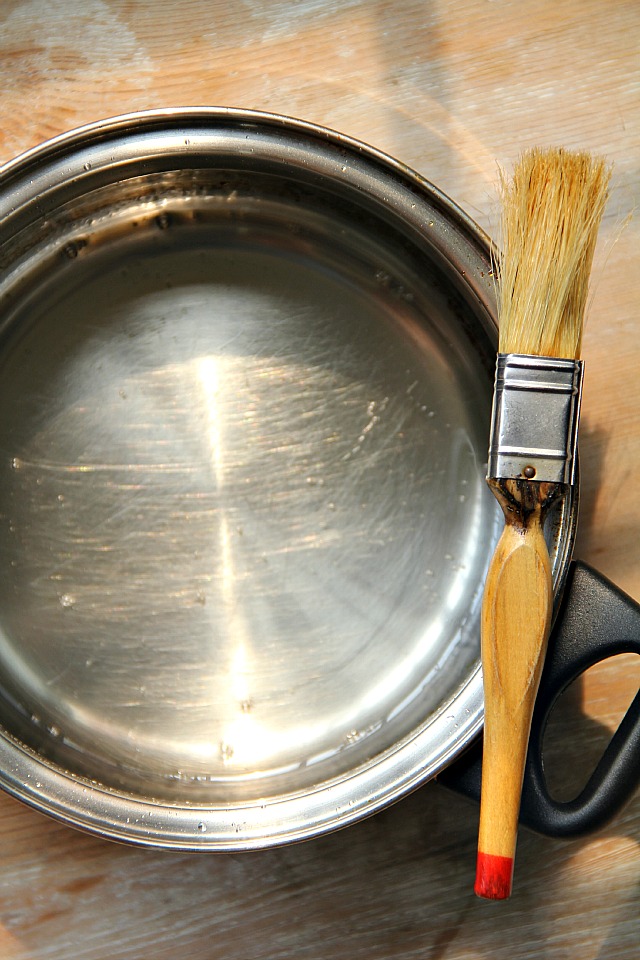 The milk powder makes the crumb moist yet feathery light and imparts a rich and creamy flavour. You could replace the milk powder and water with liquid milk but I must tell you the buns will not taste as good or have as satisfying a mouth feel. I can't say why this is so, but so it is. Could be that milk fat or sugar is more concentrated in milk powder and this contributes to both flavour and texture. Whatever the case, it ain't broke so I wouldn't fix it. 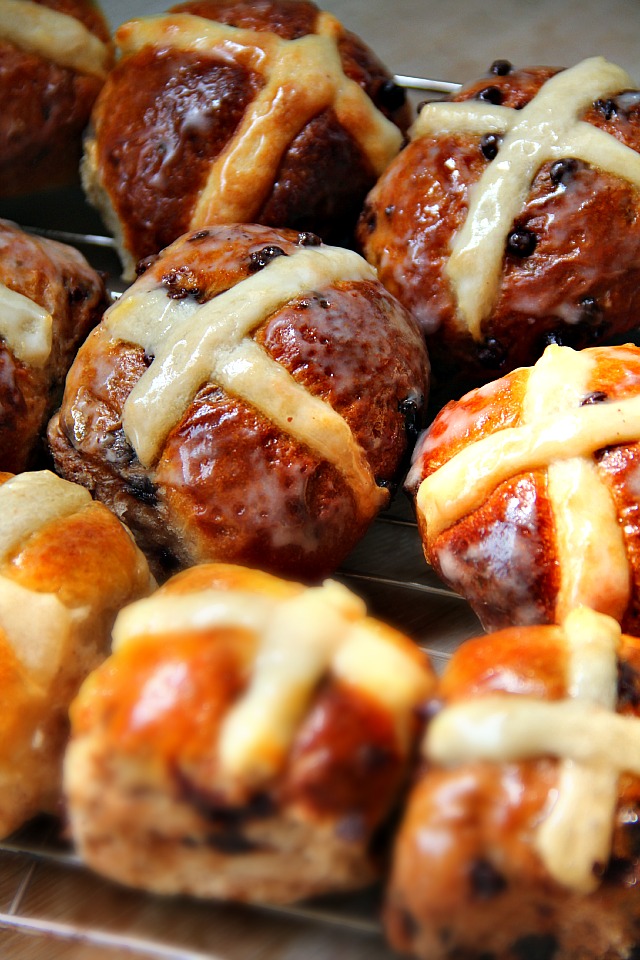 For some reason, hot cross buns are often served on Easter morning, for breakfast. I find this a bit strange, to be honest, as in the relatively modern context, they are meant to be eaten on Good Friday morning, in commemoration of the crucifixion of Jesus Christ, rather than as part of an Easter spread, a decidedly more joyous occasion. Yes, I am just a little bit of a proper food for the proper occasion geek. Then again.... maybe someone who replaces the dried fruit in a bun, meant as a marker for an occasion as solemn as Good Friday, with something as decadent and possibly irreverent as chocolate (oh horror!) without an ounce of compunction, should not be too bothered about propriety or tradition. In any case, to all who observe and celebrate, I wish a Blessed Holy Week, and a Very Happy Easter! 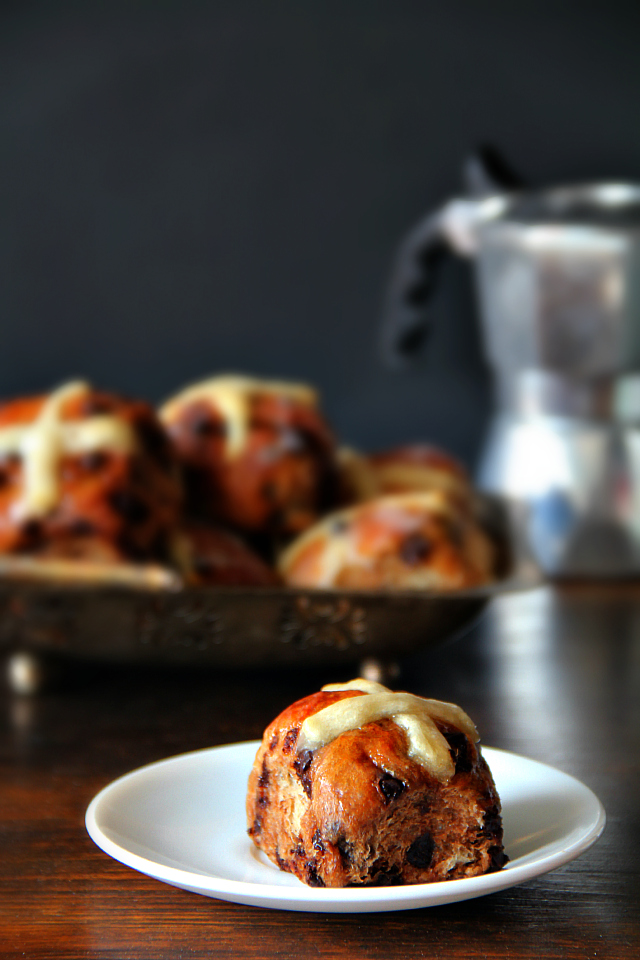 Combine flour, milk powder, sugar, salt and cinnamon in a large mixing bowl and stir with whisk until well mixed. Stir in yeast.

Pour in water and mix to a shaggy dough. Cover and leave to rest for 15 minutes. Knead in butter a third at a time, until well combined. Knead dough until smooth and elastic. Remove from bowl and shape into a neat ball. Grease inside of bowl and return dough to bowl.

Cover and leave to rise until dough is slightly more than doubled in volume. This should take about 1 hour.

Gently knead chocolate chips into dough and form into a neat ball. Place on a lightly greased surface, cover and rest for 15 minutes. Divide dough into 16 and form each into a tight neat ball. Place seam side down on a lined baking sheet.

Cover lightly with a clean cloth or plastic sheet and leave to rise for about 40 minutes or until doubled in volume. While buns rise, preheat oven at 200 C (400 F). When buns are ready for oven, brush each gently with the egg wash.

Combine paste ingredients (for crosses) until smooth and transfer to a piping bag. Pipe a cross on each bun. Bake buns for about 20 minutes or until well risen and golden. If they darken too quickly, lower temperature to 190 C (375 F).

Remove from oven when done and transfer to a cooling rack with a sheet of baking paper or tray beneath to catch the glaze drips. Combine sugar and water for glaze in a small pot and bring to a boil. When sugar melts, keep boiling until it thickens to a light coating consistency. Turn off heat and allow glaze to cool slightly.

Brush top of each bun generously with warm glaze, including crosses and leave to set before serving.